I am sitting in a cafe next to the Santiago Cathedral enjoying a mint tea, listening to numerous church bells and watching the ebb and flow of walkers continuing to cross the finishing line with their packs and walking sticks, tour groups following their leaders and individuals here to observe the unique sights.

It is impossible to count the number of walkers coming into Santiago. According to newspaper reports there has been a 13% increase in the last 12 months. Spain is in an economic crisis but Santiago is blooming. Apparently a German has published a best selling book on the Camino which is soon to be released as a film. Watch out for more Germans on  Camino routes in the future.

Why do people walk a Camino? These days I don’t think it is a religious pilgrimage for the majority but it does have a spiritual dimension for everyone. In some ways the rituals of the Pilgrims Mass provide a fitting climax and closure to the experiences of today’s pilgrims possibly not unlike those of centuries ago. 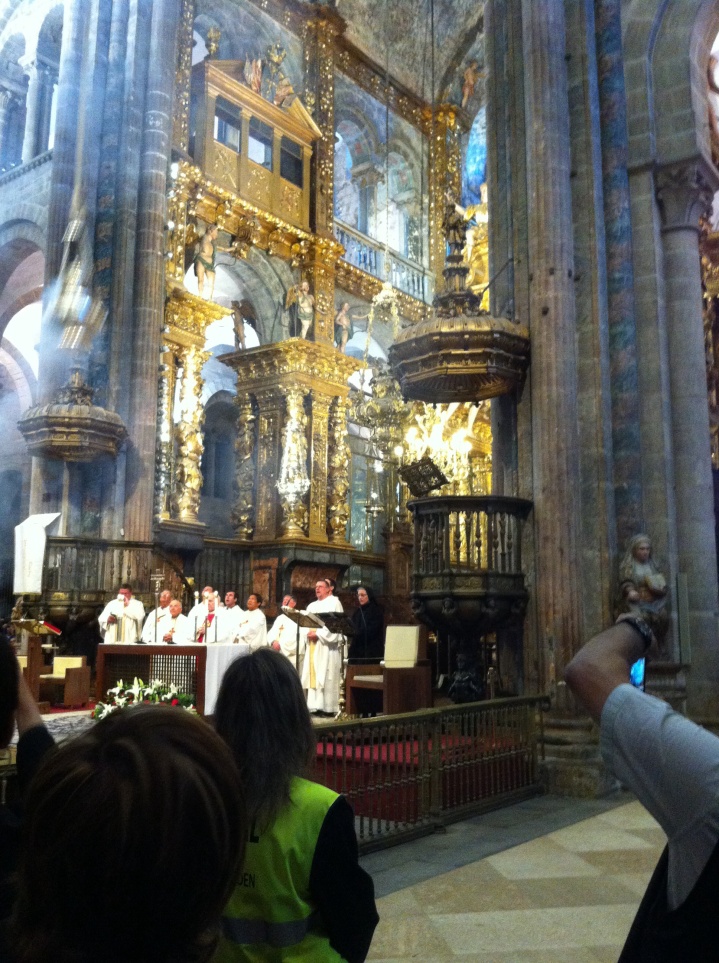 The Pilgrims Mass is like an opera with an abundance of everything. An abundance of flowers, of gold at the altar, of loud organ music, of priests (10 con-celebrating Mass including priests who had walked Camino) and of course people and lots of smelly pilgrims- seemingly thousands packed into the church, standing room only. Before our Mass started the Sister Janet Mead of Spain stood at the front altar and with skilful ease taught the congregation a Spanish hymn. She appeared to be the real boss of proceedings. At 12 noon the deacons and priests processed to the front of the cathedral wearing special vestments with St James insignia and shells. An announcement was made naming the countries of origin of all pilgrims finishing in the previous 24 hours. We were all champions and we felt so proud.

At the end of Mass the climax arrived. Eight deacons dressed in red entered the altar area and commenced operating the 20 metre rope and pulley to lower the Botafumeiro (53 kgs in weight) and light the incense. Once in motion the Botafumeiro gathered speed ( up to 80kms per hour) and soared to unimaginable heights right up to the Cathedral ceiling from one side to the other. For me this was a magical moment. It seemed like everyone’s hopes were riding on that Botafumeiro. This was the ultimate symbol of the Camino-we could each attain our dreams and hopes, go that little bit further and higher and what fun it was.

Final Comments on our experiences of our Camino

Will we do another Camino?

People say that once you do one Camino it gets into your blood. The answer is probably yes.

Would I recommend doing a Camino to others?

Definitely yes. Fitness levels are not a barrier. It has been astonishing to see the range of ages and physical abilities of those completing a Camino. Some people do the last 100kms which is the requirement of receiving the compostela ( certificate). Accommodation need not be too basic. We mainly stayed in pensions with our own room and bathroom. The other advantage for Australians walking a Camino is that prices for everything are inexpensive.

What have been some highlights?

Definitely the camaraderie among pilgrims. Walking as a couple possibly makes it more difficult to connect with other pilgrims who mainly seem to walk as individuals ( on Camino Via de la Plata that is) but we were delighted to meet so many interesting or ” crazy” pilgrims. I was very impressed with the plan of a 66 year old Belgian lady who has walked many different Caminos. Next year she plans to walk with two of her granddaughters! There was good natured jockeying for position in the group of pilgrims who headed off each day for the cheap albergues where finding the best bed was of importance. Giulio and I enjoyed walking with our 3 friends from Spain/Switzerland, Germany and Holland who kept up a rapid pace despite advancing years. Each day they took great delight in catching up and passing on the track a small, French guy they called Napoleon and his mate from Spain. Apparently Napoleon and friend were waking earlier and earlier each morning in an effort to get to the next albergue first and reserve the best beds. As we would pass the two each day on the track we would say Hola, bonjour, Buen Diaz and sail past them much to the delight of the Dutch man who thought it suitable pay back for shining torches at 4.30am. 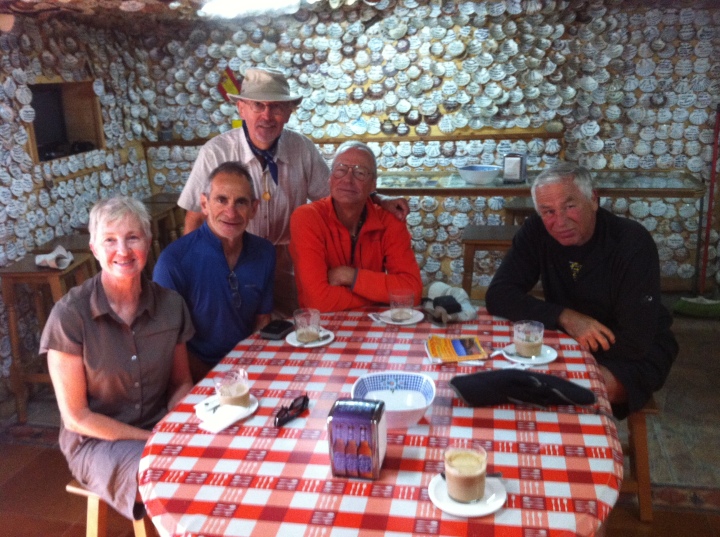 Another highlight has been the opportunity to see so many sides to Spain. We have walked through many abandoned villages, houses in ruins  with no sign of anyone under 60. We have also walked through prosperous towns, magnificent historical and cultural places and we have eaten all kinds of food from simple to sophisticated. I believe that we have been able to see a side of Spain that regular tourists may not see.

Thirdly, I have enjoyed moments of solitude, walking in so much fresh air, no TV or radio only the sounds of birds or wind. It is very restorative.

At this point I will finish the blog.Too many words for anyone to read I fear.Thanks again for reading it and for all of your comments. It has been fun and  a privilege to share our Camino with you all.

We will go to Madrid on Sunday, rested and refreshed and then arrive back in Adelaide on June 4.

Read more about why people walk a Camino  here

9 thoughts on “The Mystique of the Camino de Santiago – Why are so many people walking to Santiago?”