The 4 kilometre one way walk from Waterfall Gully to Mt Lofty is perhaps Adelaide’s most popular walk, especially for healthy types in training. Finding a park in the main car park on weekends or early weekday mornings is almost impossible.

Why do so many people do this walk? The CHALLENGE!

On arrival at Waterfall Gully you see the gushing waterfall, bubbling streams and the Swiss style chalet previously tea rooms and now a restaurant and wedding venue. Yes, you can wander at leisure and take a look at the big waterfall and the smaller waterfalls flowing after rain. But most people climb up to the top of the main waterfall and then make their way upwards to Mt Lofty which at 700 metres is the highest point in the Adelaide Hills.

It’s not seriously steep all the way, just the last 1300 metres or so. People often appear to be walking as fast as they can and some even jog. But there are seats to have a rest every few hundred metres so you can take your time. Reaching the summit is a relief as you step out to a wonderful panoramic view over Adelaide to the coast. 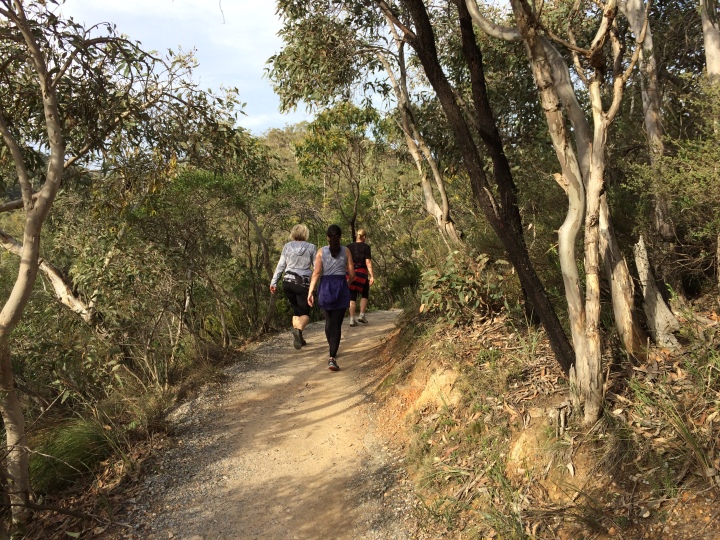 Wildlife abounds on this walk. Kangaroos can usually be seen in early mornings, echidnas during afternoons and koalas if you look high in the trees. In summer snakes may be on the track so sturdy boots are a good idea.

How long does it take to get to the top? Allow a good  hour if you are doing it for the first time. Some people may take closer to forty minutes but that is pretty fast. Going down is usually easier and quicker unless you have knee problems. Two hours or so should be enough for the return walk perhaps including a coffee break at the cafe on Mt Lofty summit.

Detours Along the Walk

Cleland Wildlife Reserve – Two thirds of the way along the track you can take a twenty minute walk to Cleland to feed kangaroos, hold koalas and have a genuine Australian experience with native animals.